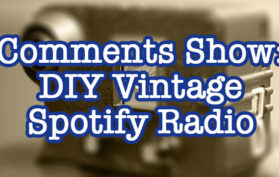 Why was the music so out of sync? How can you make it look smoother? Is hot gluing a lithium polymer battery dangerous? I wish I didn’t have to answer those questions, but I do! So watch and enjoy!!! I demand it!!! 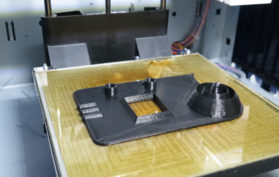 In this final “Workbench” video for my Raspberry Pi Streaming Spotify Radio Project, I add physical knobs to control the volume and power, as well as adding a battery pack and designing and 3D printing a super awesomely fantastic retro radio case! 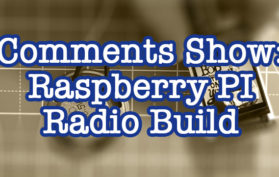 Can you control the radio using Spotify connect? Do you need a Spotify pro membership? Are there alternatives to Mopidy? Do bad things happen when you get in a conversation with your past self and future self? Find out on this episode of the Comments Show! 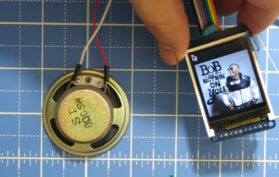 I’m making a Raspberry Pi Spotify streaming radio, and this week was terrible…After spending two videos making a DIY amplifier, I found that the quality was really poor, so I ended up scrapping that idea and using a premade one. I added an LCD screen to the Pi to show cover art while songs played. In theory, it was the perfect setup, but everytime the LCD screen was enabled, the audio would stop working (and it wasn’t power related). So this video is about my frustrations and trials and errors of getting this radio up and running. 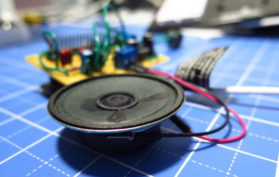 How To Make A Basic Amp

Now that we have a sound output from the Raspberry Pi, it’s not much more than a faint signal. In the example above, I used powered speakers with a built in amplifier to hear the music, but since the intent is to make my own radio, I’m looking for a more home brew method of amplifying sound. However, let me be preface that saying that I don’t know if making an amp from scratch is the best solution for this project. There are much better modules and circuits out there that can do the job much better than anything I can make, and for a fraction of the cost. So here are some of the pre-made options I’ve been considering:


Just in case your curious and wanted to make your own amplifier from scratch, below are the steps to do so. However, the results are very poor.  But I’ll show you the steps anyway just to learn the process and have the knowledge. If you don’t care about the knowledge, then just go with one of the options above and skip this section. Otherwise, here’s the steps it takes to make an amp.

The most common way of amplifying audio is using an Operational Amplifier (Op-Amp) chip. The one that I had in my box of electronic components is the LM386. Considering that it’s about $3 for a pack of 5, it’s not a bad investment. Well, I’ve got the chip…but how do I use it? Consulting my BFF Google, I found several simple example circuits and resources for getting things connected. The best resource by far is over at CircuitBasics.com, where they discuss different types of circuits ranging from easy to complex, and the benefits of each. But the one I ended up using was this guide, simply because it was simple and had decent quality results. 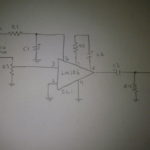 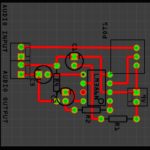 Now that I’ve got a circuit to go by, time to gather the components to make it work. Here’s what we’ll need:

Using a breadboard (at first), I connected all of the components as per the circuit diagram above. The final circuit looked a little something like this: The audio input (green square on the left) is where I connected the output from the audio output shield we made in step 3. it’s all powered by a 9v battery. Turning the potentiometer (blue box in diagram) will adjust the volume of the sound. Playing the sample sound (aplay /usr/share/sounds/alsa/Front_Center.wav) should produce an amplified sound through the speaker (with possibly a little static). Below is what my actual breadboard looked like. Now the tricky part here is to combine this amp onto the audio output circuit board we just created. And another tricky portion of that is to integrate the power that powers the amp with the output power from the Raspberry Pi. I ended up having to just create a whole new circuit board with everything on it. And to be honest, the results were less than spectacular…probably due to the fact that the Pi wasn’t providing enough power to the amp. 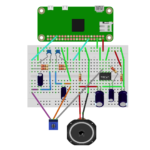 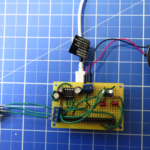 With the amp built and the final results lacking, I think I’ll be going with the PAM8403 amplifier board and just saving myself the headache. 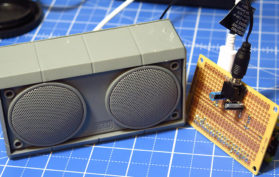 
The first biggest hurdle to overcome is the fact that the Pi Zero (at least at the time of this post) doesn’t have audio output. There are a few different ways to get around that.

If you go with option 1 or 2, you can skip to step 5, but if you want to make your own custom audio output, continue reading. The Adafruit blog has a fantastic guide for how to make your own PWM audio adapter. And it’s actually surprisingly easy…if you’re not afraid of a soldering iron. The basic idea is to force the audio through the GPIO pins of the raspberry pi. In this case, it’s pins 18 and 13 (and ground). You can see a schematic below for what I’m going to try and accomplish. 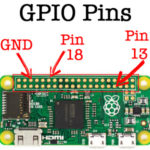 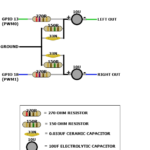 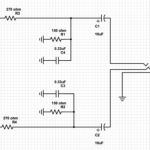 And here’s the parts it requiers:

I was able to arrange the components on a bread board and then hooked up a pair of powered speakers for testing. 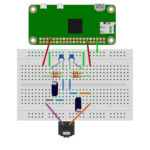 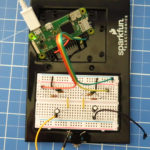 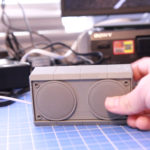 So to see if this micro-contraption works, we need to tweak the raspberry pi software a little bit. Since we enabled SSH on the raspberry pi, we can login into it remotely from a different computer. On Linux and Mac, you can open up a terminal and just type “ssh pi@192.168.###.###” (replacing # with the static IP you set) and login with your password. On Windows, you’ll need a third party SSH tool. I’m fond of Putty for Windows. Download and install it, then set up a new SSH connection pointing to your Pi’s static IP. Then just login with your password.

We have to tell the Pi to force audio to the PWM pins (Pins 18 and 13), and there are several different methods of doing this, but one of the simplest ways I found was to add a line to the configtxt file:

After rebooting, I now need to force the Raspberry Pi’s audio through the PWM channel. So after reconnecting to the Pi through SSH, type “sudo raspi-config” and go to 7. Advanced Options > A4 Audio > 1 Force 3.5mm. Then save and exit. With the powered speakers on and plugged into the breadboard, and the breadboard plugged into the Raspberry Pi, I can test it all out by playing some audio using this command:

If you can hear audio then everything’s working correctly and we can move everything from the breadboard to a nice, compact circuit board! To make it easy to connect the circuit board to the Pi Zero, I turned the Pi Zero off, disconnected everything, and soldered some header pins to each of the pin ports. Then on the circuit board, I soldered some female header pins so that they could fit together easily. From there I soldered on all my components, fired the Pi back up, and tested it out again to make sure it still worked. Looking good! Now for the Amp! 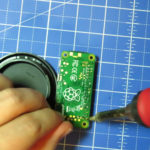 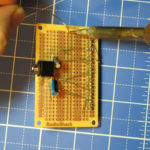 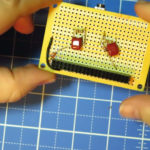 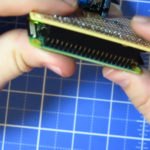 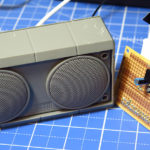 Can the Teddy Ruxpin repeat what you say? Can it sing WuTang clan? Can it host the comments show? Not to spoil things, but yes, yes, and yes…it can do all those things!!!

Make Your Own Smartwatch From An Old Cell Phone (Part 2)

Can you email your photos to gmail? Is the new style terrible? Are programming videos entertaining? Will I take more selfies? These questions and more are answered on this weeks comments show!

Tinkernut: Behind The Scenes – Ideas & Filming

Take a peak behind the scenes of my next video! Find out where I get the ideas from and how I go about creating my projects! 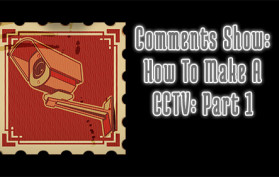 Comments Show: How To Make A Motion Detecting CCTV – Part1

Can you use App specific passwords? Is there a more secure way to store passwords? Can you use this to make a Portal Turret? I’ll answer these comments and more!